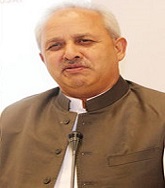 Dr. Habib Ahmad is presently working as the Vice Chancellor of the historic Islamia College, Peshawar, Pakistan. He is Tenured Professor of Genetics. He has received various awards in recognition of his scientific research and achievements. He has got the coveted honor of being a resource person and an inspirational speaker at many national and international universities. He is the author of more than 300 hundred research papers. Along with his exceptional contributions to Genetics,

Principal Scientist of the CSIC
Ministry of Science, Innovation and Universities
Spain

Scientific Researcher of the CSIC
inistry of Science, Innovation and Universities
Spain

Genetics and development of plant materials

Dr. Russel J. Reiter, Ph.D., is Professor in the Department of Cellular and Structure Biology at the University of Texas Health Science Center, San Antonio, Texas, USA, Dr. Reiter has received three honorary M.D. degrees and one honorary D.Sc. degree. He has received numerous awards for his research including the A. Ross McIntyre Gold Metal (USA), the US Senior Scientist Award (Germany), Lizoni Lincee Award (Italy), the Inaugural Aaron B. Lerner Pioneer Award (FASEB, USA), etc. His scientific publications have been cited in the scientific literature more than 83,000 times; his h-index is 140. Thomson’s Institute lists Dr. Reiter as one of the World’s Most Influential Scientific Minds-2014 and he is listed in the top 100 scientists in the world in terms of frequency of citation in the fields of Cell Biology and Biochemistry. He is the Editor-in-Chief of the Journal of Pineal Research (2013 impact factor = 7.81) and is or has been on the Editorial/Advisory Board of 26 other journals.

Amy Greeson, RPh is CEO of Natural Discoveries, Inc., a drug discovery, research company. Greeson has traveled extensively internationally, exploring remote regions, collecting specimens and teaming with researchers in efforts to discover novel compounds. Specimen collections have come from some of the most bio-diverse regions of Planet Earth and from areas which often have no documentation of the flora or fauna, or the medicinal use of plants. Significant research findings to date have been in the areas of cancer, inflammation and pain, the natural activation of stem cells, skin care and malaria. A graduate of UNC-Chapel Hill, she presently serves as an Alumni Board Member of the UNC- CH Eshelman School of Pharmacy. As an integrative pharmacist, Greeson's work in remote bio- diverse countries with indigenous people, searching for novel medical treatments, has attracted interviews with NPR on several occasions, Australian Public Radio, and numerous articles and other press. Her book, And The Silent Spoke, will be released in 2018, while Expedition Congo, a docu- mentary based on the 2016 expedition to the Congo, is slated to debut in early 2018.

Dr. Grace Chen obtained her Ph.D from University of Wisconsin at Madison, and did her postdoctoral studies from University of California ̶ Plant Gene Expression Center. She has published more than 44 papers in reputed journals is globally recognized as an expert on oilseed biotechnology.

Synan F Abu Qamar has completed his PhD at Purdue University, Department of Botany & Plant Pathology in 2007 and Postdoctoral studies at the same university in the area of Molecular Genetics of Plant Immunity. In August 2008, he joined the Department of Biology at the United Arab Emirates University as an Assistant Professor. Currently, he is an Associate Professor. His current research interest is in the area of Plant Molecular Genetics/Plant Biotechnology. He has co-authored a number of publications in peer-reviewed international journals. He is serving as an Editorial Board Member of reputed journals.

NASIR S. A. MALIK has 40 years of agricultural research experience, including 16 years in an industrial environment. He has written over 50 research articles, one patent, (publication list attached), numerous industrial reports, pesticide registration reports for EPA, intellectual property disclosures, and attracted $2 million in extramural funding from industrial clients and over $700K in competitive research grants as PI &Co-PI. He received numerous invitations for seminars, writing reviews, chapters to edit books.

Dr. Charles Powell is an Emeritus Professor at the UF/IFAS Indian River Research and Education Center. Retiring in 2016, Dr. Powell maintains a presence at IRREC with his research interests. Upon his retirement, he had served as a research professor, and as an associate director.

Current research is focused on control of HLB, or citrus greening. Recent research has involved work with efficacy and infertility of Madeira mealybug on plants prepared for shipping.

Dr. Eloy Rodiguez is the James A. Perkins endowed chair in Environmental Studies and Chemical Biology at Cornell University in New York. He has published over 170 research articles on the chemistry, evolutionary biology and ecology of secondary metabolites and their medicinal and agricultural uses. He is a AAAS fellow, founding member of SACNAS and has lectured throughout the US, Europe, China and South America on the chemistry, physiological role and medicinal use of plant secondary metabolites. Dr. Rodriguez' research has been funded by NSF, NIH and private institutions.

Medicinal use of plant secondary metabolites and agricultural science

Eugenija Kupcinskiene has been working at Lithuanian University of Agriculture. Currently, she is working in the Department of Biology at Vytautas Magnus University (Kaunas, Lithuania), delivering lectures in multiple courses. Her research experience is obtained by the training at East and West European universities. Research interests extend from ecosystems to Molecular biology, starting from enzymatic DNA methylation. Since 1976 she has been participating in the international scientific events. She is the Author of over two hundred publications. Her current research interests include Natural and Anthropogenic Stress, Oxidative Stress, Allelopathy, Climate Change, Heavy Metal Tolerance, Air Pollutants, Industrial Pollution, Bioindication, Plant Surfaces, Nutrition, Secondary Metabolites of Plants, Invasions, Populations, Plant Molecular Biology and Riparian vegetation

Geert De Jaeger is Associate Professor at Ghent University - Department of Plant Biotechnology and Bioinformatics, and Adjunct Director of the VIB Center for Plant Systems Biology (Ghent, Belgium). His main research interest is the development and application of interactomics technology in Plant Research to study the regulation of plant growth at the molecular and biochemical level. His research team obtained high international visibility with their state of the art AP-MS platform that maps protein interaction networks in plants. In the past 5 years this technology generated data for 42 TIER 25% manuscripts, holding 12 TIER 1%, and 33 TIER 5% manuscripts. He currently authored 82 A1 publications with more than 3200 life time citations, H-index of 33, and he holds 7 patents.

Ryoung Shin, PhD is a Unit Leader and the Principal Investigator of Regulatory Network Research Unit, RIKEN Center for Sustainable Resource Science. She had worked on the molecular mechanisms of virus resistance in hot pepper and earned her PhD at Korea University in 2002. She moved to USA for her Postdoc Fellow and started to research on potassium sensing and signaling in plants at Donald Danforth Plant Science Center, St. Louis, USA. In 2008, she became the Unit Leader at RIKEN and continued to work on plant potassium deficiency signaling. Recently, her team expanded the research to radiocesium remediation after the accident at the Fukushima Nuclear Power Plant in Japan following the great earthquake in 2011 caused the spread of radiocesium over the surrounding areas.

Douglas Jose Marques, PhD in Agronomy - Soil Science/Plant Nutrition and Fertility at the Unifversidade Federal de Lavras, Brazil/UFLA (2013). I currently hold the position of Integral Professor at the Alfenas/FETA Foundation of Education and Technology, which is the maintainer of the Universidade José do Rosário Vellano/UNIFENAS, Coordinator of the Olericultura Studies Center, Horticulture and Experimentation Sector and Experimental Area of Organic Agriculture. Professor of the Professional Master's Degree in Production Systems in Agriculture and in the PhD course in Sustainable Agriculture. In the area of Ecophysiology and Fertility and Mineral Nutrition of Plants I have directed the studies to the beneficial effect of silicon as a source of water stress in maize and sorghum for arid and semi-arid regions. We are working with some extension projects in the creation and conduction of gardens: community, urban, schools, asylums and therapeutic and transformation of the same to the system of organic agriculture.

Her research interests are: Electrochemical sensors, Stripping Voltammetry, Environmental Monitoring, Nanostructured materials Electrochemical Characterization, Oxidative Stress and Antioxidant Activity investigations. She published in Russian and International Journals more than 500 papers and abstracts and 5 books in Stripping Analysis in "Chemistry" Moscow (three of them in 1972, 1982, 1988) and by "Willey & Sons", USA (two of them in 1974 and 1993). She has 15 Russian Patents

Joseph Gale is a professor emeritus of the Hebrew U. of Jerusalem. His original interests were in Environmental Plant Physiology. After a period of research and consultation at NASA, USA, working on their Life Support in Space project, he turned to Astrobiology. Together with his astronomer colleague, Prof. Amri Wandel of the Racach Inst., HU., they have developed courses in Astrobiology for undergraduate students, with both science and humanities backgrounds. He has published more than one hundred refereed papers and has authored/co-authored and edited four books.

Levan Ujmajuridze has a PhD in Agrarian Sciences. He is an honored winemaker of Georgia; International expert; Member of Commission at The International Vine & Wine Organization OIV; National Focal Point of the Plant Genetic Resources at Food and Agriculture Organization of the United Nations FAO. He has a basic expertise in agrodiversity restoration and conservation. He gives lectures at the leading Georgian Universities – Georgian Agrarian University, Technical University of Georgia. He has up to 47 scientific publications, 4 monographs, 1 invention and 2 patents – Georgian new wheat variety “Tbilisuri 15” and new oats variety “Argo”. Since 2014 he is a Director of LEPL Scientific-Research Center of Agriculture, Ministry of Environmental Protection and Agriculture of Georgia. The above article is a joint work with the Institute of Organic Chemistry, which concerns creation and use of new biological drug in bio vine growing.

Member of Commission at The International Vine & Wine Organization OIV; National Focal Point of the Plant Genetic Resources at Food and Agriculture Organization of the United Nations FAO.